Hey readers! I just wanted to give you a brief thank you thank you for 200 lovely followers! How did I end up with so many amazingly patient people? Yes, I know, it’s been nearly a month since I posted. I’m sorry! AP US History and Honors English have me so busy these days that I can barely photograph books for Instagram + read those said books. But I’m back, so don’t worry!

Initially, I was only going to discuss the basics here: my current reads, fall releases, & my bookstagram slump (more on that later) but when I asked on a Twitter poll if you lovely wanted to see me talk about my personal life on my fall 2016 reading update, I was overwhelmed with positive comments, so I thought let’s give it a go!

I have lots of things to discuss, so I’ll do my best to organize everything without my post being one big jumbled mess. (It’s probably going to be anyway, to be honest.)

Since I began school in late August, I’ve been swarmed constantly with annotations after tests after term paper in both my English and APUSH classes. So I guess what I’m saying is, I haven’t made much a priority out of school beside my Bullet Journal, Instagram, and reading

To top that, I’m pretty active with my speech and debate team, so that soaks up every Saturday of mine Since these 6 hour tournaments drain my energy *nudge* *wink* it’s called being an introvert *wink* *nudge* *wink* means I either have to procrastinate my homework until Sunday or attempt it on a Friday night (actually I was writing my APUSH essay and decided to blog instead. . .so, welcome.)

Now that I’ve whined enough, I’d like to say that school isn’t all bad. I really like my choir, I have a really chill APUSH teacher, and I see my friends constantly. It’s the constant work load that gets to me sometimes, and I’m only in two honors classes! Soon enough it’ll be Thanksgiving weekend, Christmas break. . .it’ll all be okay 🙂

Since I started school, I’ve read a total of. . .11 books. That’s late August, September, October, + most of November. Ugh. And I only read 2 books in October. Now mind you, I’ve read 100+ books in both 2014 and 2015, but I’ve currently read only 66 books in 2016 so far. It’s not necessarily bad, I’m quite proud I’ve managed to read at all, it’s all just a little. . . different than usual. As more time off school circles in, I hope to accomplish more for my goodreads reading challenge.

Let’s talk about fall releases + anticipation! In September we got Crooked Kingdom, Empire of Storms, + Furthermore. In October we received Gemina, The Hammer of Thor, + The Midnight Star. And finally this month we got The Sun is Also a Star (review to be up soon!!) Heartless, and A Million Worlds With You. I’ve always wondered why a majority of YA books are released during the fall, when teenagers are crammed with school work. . .

I’ve been blessed with some amazing ARCs this fall, as well. I received The Midnight Star, The Sun is Also a Star, Gemina, Girl in Pieces, and Caraval. In October I had one of my largest book hauls to date, which was pretty epic, to be honest. I bought:

So you can probably guess how ~obsessed~ I was when I announced my October haul toward the end of last month. Meanwhile, I’ve only managed to read *counts mentally on fingers* one of those (Illuminae + The Elite don’t count this time because I’ve already read those before purchasing) which was Frost Like Night, the finale to the Snow Like Ashes trilogy and it was amazingggg.

Since Heartless was published, I’ve pretty much reached the end of my anticipation of 2016 releases, which makes me really sad, actually. What were your favorite YA reads of autumn 2016? Comment below!

Speaking of Heartless, I was devastated after TWO unrequited ARC requests from Macmillan  but lucky for me, I was fortunate enough to attend a Marissa Meyer @fiercereads tour only an hour and a half north of me! My fellow Lunartic friend joined me too and the library the event was hosted at was architecturally pleasing and I wished I’d taken more photos of the place. It was super fantastic, trust me! Plus, due to schedules, I haven’t seen my friend much so it was great to catch up with my (only) Marissa Meyer buddy!

Fantastic Beasts and How I Loved Them

Next. . .uh, Fantastic Beasts and Where To Find Them, of course! Who saw the movie last week? Yesterday? AH IT WAS SO GOOD. Eddie Redmayne is incredibly adorable I mean look at that face! ❤ ❤ I can’t wait to see JK Rowling’s breakthrough role as scriptwriter and introduce to a new world of wizards.

While I hope to acquire some FB funkos real soon  I’m already waiting to buy my ticket for the next movie in 2018, which is too long for me. *cries* But on the other hand, I actually really like the idea of a new Harry Potter franchise. Since I was too young for the first wave of HP phenomenon, I’ll stick to Newt and friends. I mean he’s a hufflepuff, so all the houses can just ~STEP~ aside. A new era is here, and it’s going to be bright.

I have two slumps to talk about here, so buckle in for a pity parade. Okay, not really, but let’s get this straight: I’m rarely a victim to the notorious “book slump.” *GASP* I know, I know, how could I be a real reader without experiencing a slump?

Well, it’s easy. I experience slumps, but they’re more like, creative slumps. I don’t sketch or draw for a couple of months, I don’t take photos for Instagram simply because I don’t feel like, or I experience writer’s block on more than one occasion. My creativity ebbs and flows as the sun rises and falls. I have a tendency to push myself too hard, that’s all.

With the arrival of school, I was forced to put my book The Midnight Train on hold. There are some days the thought perks in my mind that I haven’t written in my book since September and I get sad again. I miss writing, but meanwhile I’ve probably conjured up a dozen more story ideas since I put mine on hold. Even when I’m not physically writing my brain is on auto-create.

As for my bookstagram slump, well it was more a sequence of cause & effect. I reached 30,000 followers in August (and today I reached 40,000!) the days were sunny and bright, and my account was on top of its game! But as soon as school began I arrived home exhausted to take photos. Too much homework, too many Youtube videos to catch up on, and too many snacks to consume. This led to many sunny days and wonderful chances to take photos tainted by exhaustion. And soon enough I used other accounts for inspiration and grew lazy to create my own. Once I realized that I needed to get my shit together, I fell into a deep bookstagram slump throughout the month of October. Like, all of October. For every photo I took, I posted three old photos. My account was torn between the pastels of summer and the dreary outlook of fall

So I wasn’t sure what to do. Even now, late November, my account still ebbs and flows between liking and hating. Back in August I set my goal for 50k by the end of December. Not anticipating this slump in the slightest, I should be lucky to reach 45k. That being said, I’d appreciate any of the progress made this year but I was pretty set on 50k.

To lift my spirits I’ll post my top five favorite photos taken after (and maybe even during) my slump: 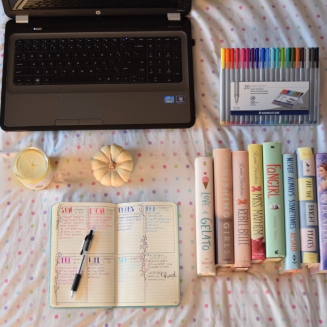 I still manage to maintain the pretty pastels despite the cloudy weather!

This year, in order to focus on academics and APUSH (yes, just my history), I decided to take a break from my annual tradition of NaNoWriMo. I’ve done every NaNo (including both April and July Camps) since late 2014, and now it breaks my heart to skip out on such a monumental achievement in my life so far.

But I have been brainstorming several ideas, such as expanding on my story set in a distant future Venice, Italy, and includes a diverse group of girls causing chaos in the city and the protagonist is bisexual, but I divulge more than that *laugh* All I can say is I’m very excited to write some positive rep soon ❤

So while I may not be physically writing my books, I have been plenty busy planning and mentally plotting. But fear not, I’ll be participating in the April 2017 Camp NaNo once again. What will I be writing? Who knows, I could have 20 different ideas by then.

As it’s quite evident, I didn’t blog between early September and late October. I’M SUCH A DISAPPOINTMENT, I KNOW. I still have to post my reviews for The Sun is Also a Star + Caraval (though I need to read that first. . .) BUT ANYWAY. I have lots of ideas for future posts and even though my school schedule is relentless, I promise I’ll make time when I can *wink* This includes reviews, my very first @fairyloot unboxing (WOOHOO), and most likely some kind of Christmas celebration. But the rest is just a surprise!

So today is Thanksgiving! Whether it was the book that made me love reading, or presented me with a fresh, diverse voice in YA, there are plenty books in which I’m grateful exist, as well as the writers who work endlessly to produce their art.

I want to thank the entire bookstagram community for its endless support for me, even during my month-long October slump. 40,000 is a lot of people, and it stuns me each day how blessed I am to give you all beautiful as much as possible! You guys are the backbone of my love for blogging and I don’t know where I’d be without you!

I want to thank Twitter, for turning and twisting my perspective on people in my books and the world around me. Your endless promotion of diversity has given me ample ways to treat people as equals and I can never repay you for that. Although your protests & drama can reach levels that are infuriating, they convey the strongest of messages that change so many lives in the process.

I want to thank my blog followers, for sticking by me despite my lack of proper posting. You read my reviews, comment on my posts, and continue to support me! It’s all a blogger could ever ask of you ❤

Remember if you ever have any inquiries on blogging, books, or bullet journal, check out my contact page for further information on how to reach me!

Thank you, no matter who you are, for being a part of the book community. Remember that you do matter. You always will.

Thank you for reading, I was so happy to share + update my life with you! I can’t even believe it, 200 followers is incredible! Have a lovely day!

Hello! I'm Jill and I'm a reader, bookstagrammer, and book blogger who can be found drinking too much coffee, reading from my endless stack of unread books, and browsing social media (which I also consider as reading.) View all posts by booknerdreads

Hello! I'm Jill and I'm a reader, bookstagrammer, and book blogger who can be found drinking too much coffee, reading from my endless stack of unread books, and browsing social media (which I also consider as reading.)